Homestuck is a very long webcomic with a quirky style of narration and presentation that makes it look like an old text adventure game—but really, it’s just a linear story that you read and watch, barring some of the flash games. People call Homestuck a multimedia masterpiece because it’s got musical segments, playable set pieces, cool animations and everything the World Wide Web will allow an artist to put in it.

The plot of Homestuck is infamously convoluted but boils down to: four kids who know each other online play a video game together, inadvertently causing the apocalypse. To beat the game, they have to interact with the game world’s characters, and with a disgruntled group of internet trolls.

How to read Homestuck

Most fans use the Homestuck Collection, a fan-made downloadable archive app which is endorsed by the author, Andrew Hussie, and which includes almost every bit of content listed below.

(Why is this? Until 2020, Homestuck used a now-dead technology called Flash to display animated or playable content. When Flash stopped working, the animations and games on the official website were replaced with low-quality YouTube recordings. To restore the comic's Flash features, a couple heroes named Bambosh and GiovanH created a downloadable executable called the Homestuck Collection, available for Windows, Mac and Linux computers. If you are a mobile/Chromebook only reader, you have no recourse but to use the half-assed aforementioned official website, homestuck.com.) 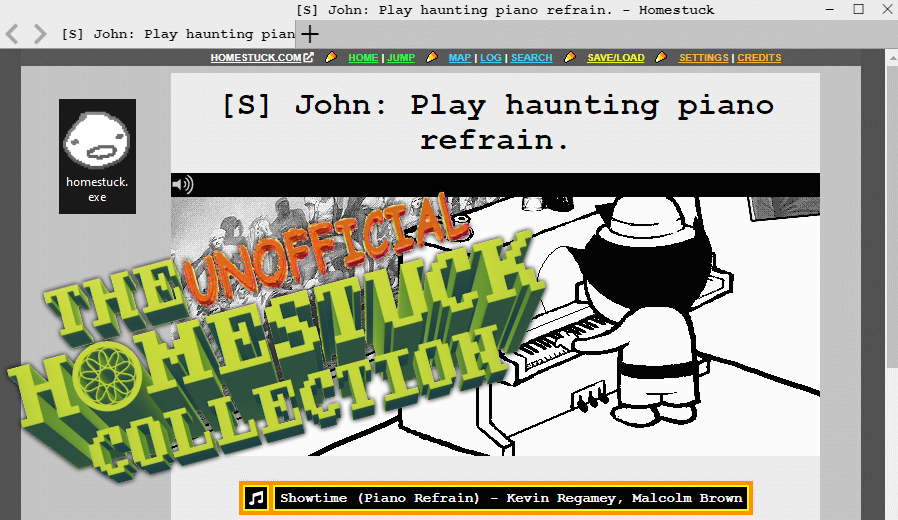 If you only care about the webcomic, it’s fairly straightforward. Start with the first page of Homestuck, stop when you reach the credits. But beyond the webcomic, there's much more!

Most of Homestuck's side-content is non-canon, but provides additional context or tells entertaining standalone stories. Completionists can use this guide and follow my recommended order. You can also use the Homestuck Timeline if you absolutely must read everything in the chronological order it was released (but the Homestuck Collection also presents most of the non-game content that way, so I recommend that first).

Before Homestuck, Hussie wrote three other webcomics in a similar style. While they tell unrelated stories, Homestuck makes references to all of them over the course of its run. You can read these at any time.

These aren't stories, but rather official social media accounts containing canonical facts and information not revealed within the webcomic:

I don’t strictly recommend reading all of these, and in some cases like Namco High I actively recommend against it, but for the curious:

Besides these, there are a bunch of high quality unofficial fanworks. Since a summary would be perennially out of date, I recommend just asking the Homestuck Subreddit or the Homestuck Discord for recommendations.

Why do people hate Homestuck?

You may have heard Homestuck fans were so bad they got entire hotels and conventions banning them. These claims have never been verified, but it’s true that the fandom has been historically quite annoying. I’m going to try to explain why. Take this with a grain of salt—these are only my personal opinions and beliefs.

Homestuck was an obscure webcomic appealing mainly to Computer Science nerds and Andrew Hussie’s previous fanbase until it reached Act 5 Act 1: Hivebent, or The Part With The Trolls, in 2010. The trolls were twelve characters with strong personalities and a simple, recognizable, easily replicable visual template (custom blood colors, horns, zodiac signs on simple clothing).

Overnight, the makeup of the Homestuck fandom changed. Hordes of teens took over anime conventions, dressing up as the troll who was just like them. Poorly sealed gray body paint, an alien romance system and intentionally abrasive personalities were the perfect trifecta of annoyance to the average con-goer. The recognizable designs pointed people to Homestuck, people got sick of hearing about it, and the hate began to fester. I believe this is the seed of the terrible reputation Homestuck fans get, even when tweens moved on to greener pastures around 2014 as the comic went through endless pauses in content.

In recent years, Homestuck has kept its negative reputation more as a result of behind-the-scenes problems with the comic and its side projects (in particular the Kickstarter-funded adventure game Hiveswap) boiling over into public drama. Andrew Hussie, the various freelancers he’s employed over the years, and the fandom have often had an antagonistic relationship. As of writing, development on Hiveswap is supposedly still quietly ongoing, but there’s nothing else on the horizon.

I encourage everyone reading this to remember: it’s just a webcomic, you should really just relax.