Long-form literary analyses about the Homestuck franchise, from theories to theses. If you have anything you'd like to add to this list, please use the Contact page. 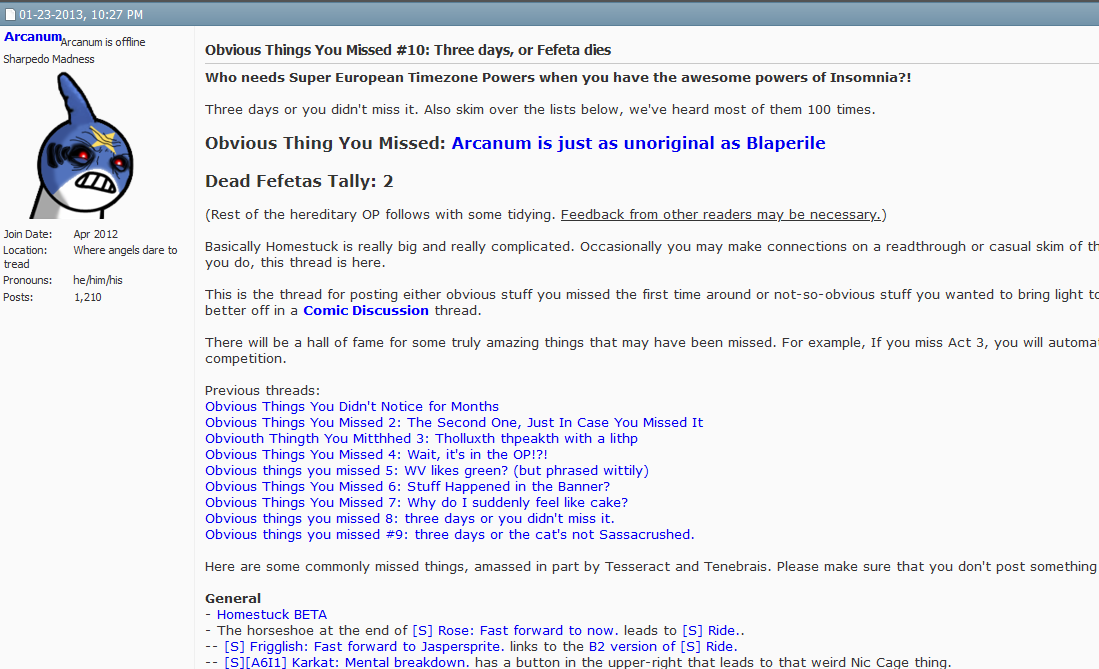 Cataloguing common pieces of trivia and things people missed was the duty of the posters at the now dead Obvious Things You Missed threads. This is an archive of everything they felt worth cataloguing, with some modern additions. 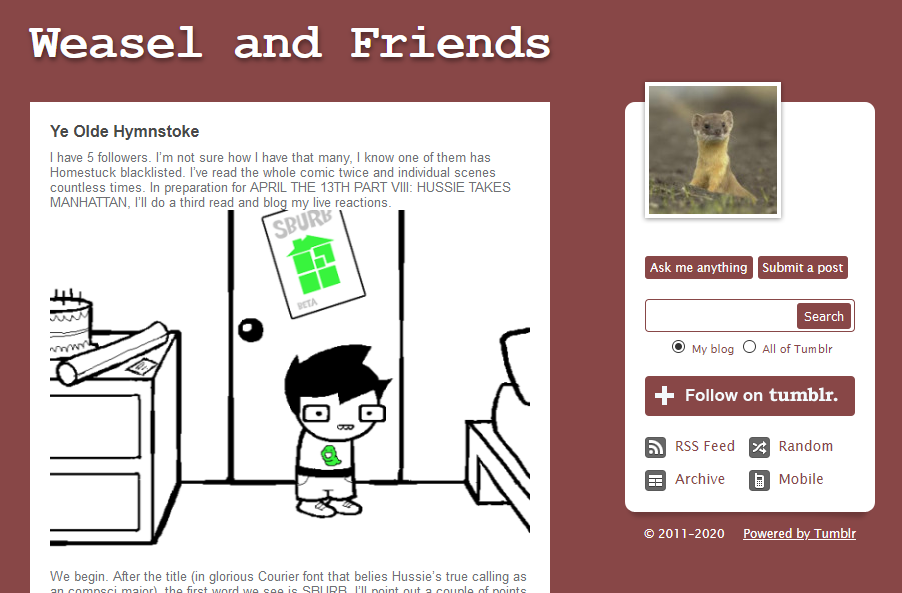 A third reread turned into a literary analysis series, Bavitz (an internationally read writer under a pseudonym) goes through the early parts of Homestuck and extracts every piece of meaning he can from them. 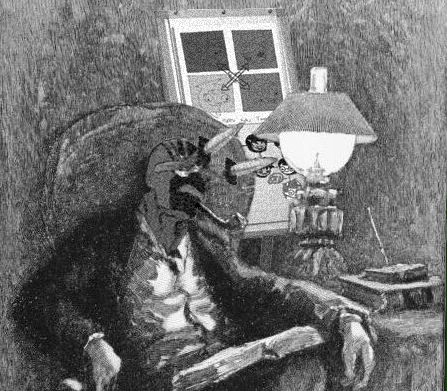 BladekindEyewear was the biggest Homestuck theorist and analyst up to 2016, to the point he was referenced during the Union Jack section of Homestuck. Here is a list of his most important theories, from The Ultimate Riddle, to Classpect inversion, to the ones he actually got right. 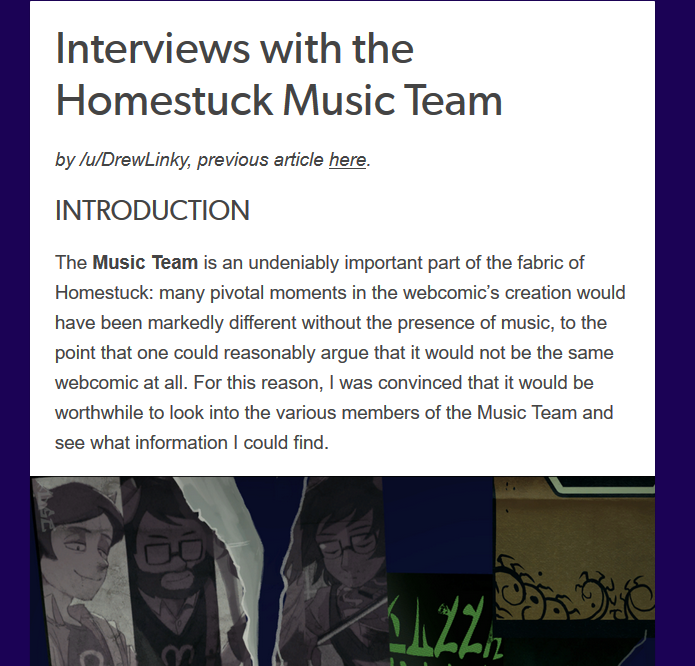 A moderator of /r/homestuck took it upon himself to write journalistic articles on many fandom topics. Examples include interviewing Gankro and the Homestuck Music Team, and longform articles on Land of Fans and Music and RPGStuck. 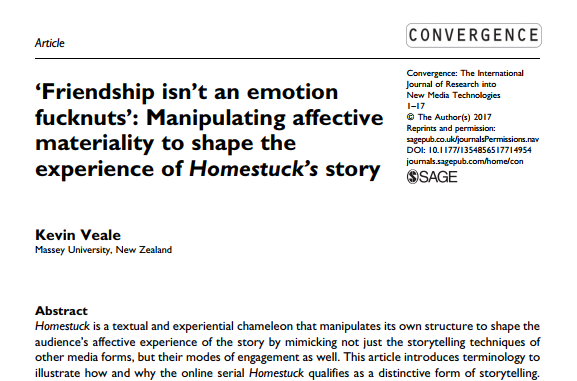 A full, properly published literary paper by a professor of Media Studies on "manipulating affective materiality to shape the experience of Homestuck's story". Those who understand that will definitely enjoy the paper. 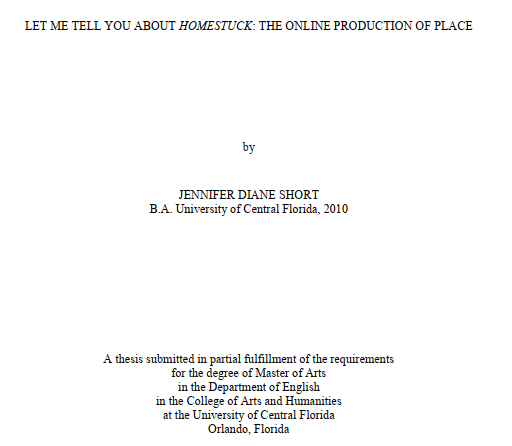 Let Me Tell You About Homestuck

A 91 page master's thesis (for a Master of Arts in English) about Homestuck that claims to investigate the potential for the "online production of place". 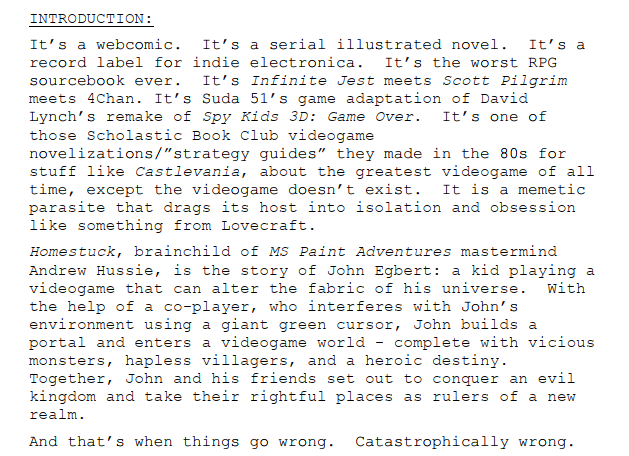 IT'S HARD AND NOBODY UNDERSTANDS

A 232 page thesis of annotations and commentary on Homestuck through Act 5 Act 2 by a Doctor in English Literature. 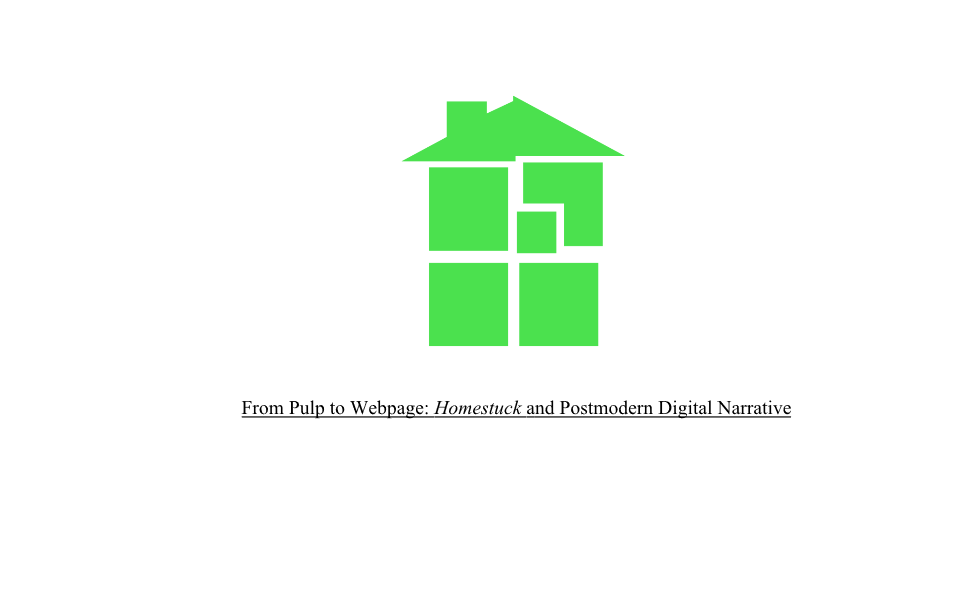 From Pulp to Webpage: Homestuck and Postmodern Digital Narrative

A 100 page honors English thesis that analyzes Homestuck as a graphic novel and examines its multimedia aspects and how it relates to the Internet. 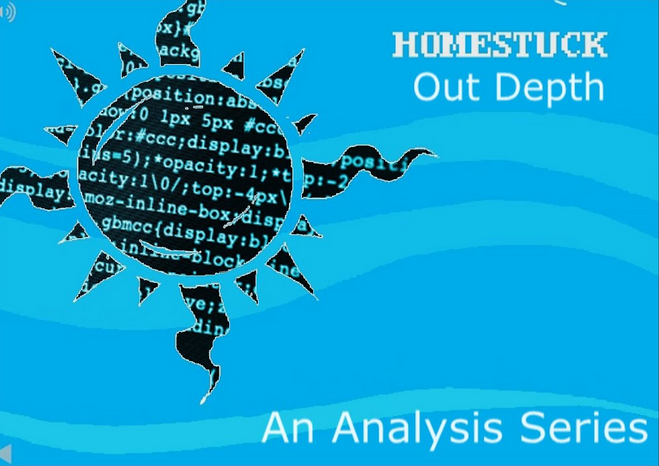 Often just known as "Tex Talks", this is a very clever video analysis series focused on specific aspects of Homestuck, like the ties to Computer Science, Platonic Realism and more. 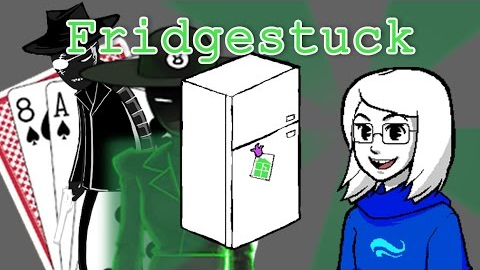 A video series "full of fridge facts and theories" about the cast and plot of Homestuck. Very influenced by fanon theories. 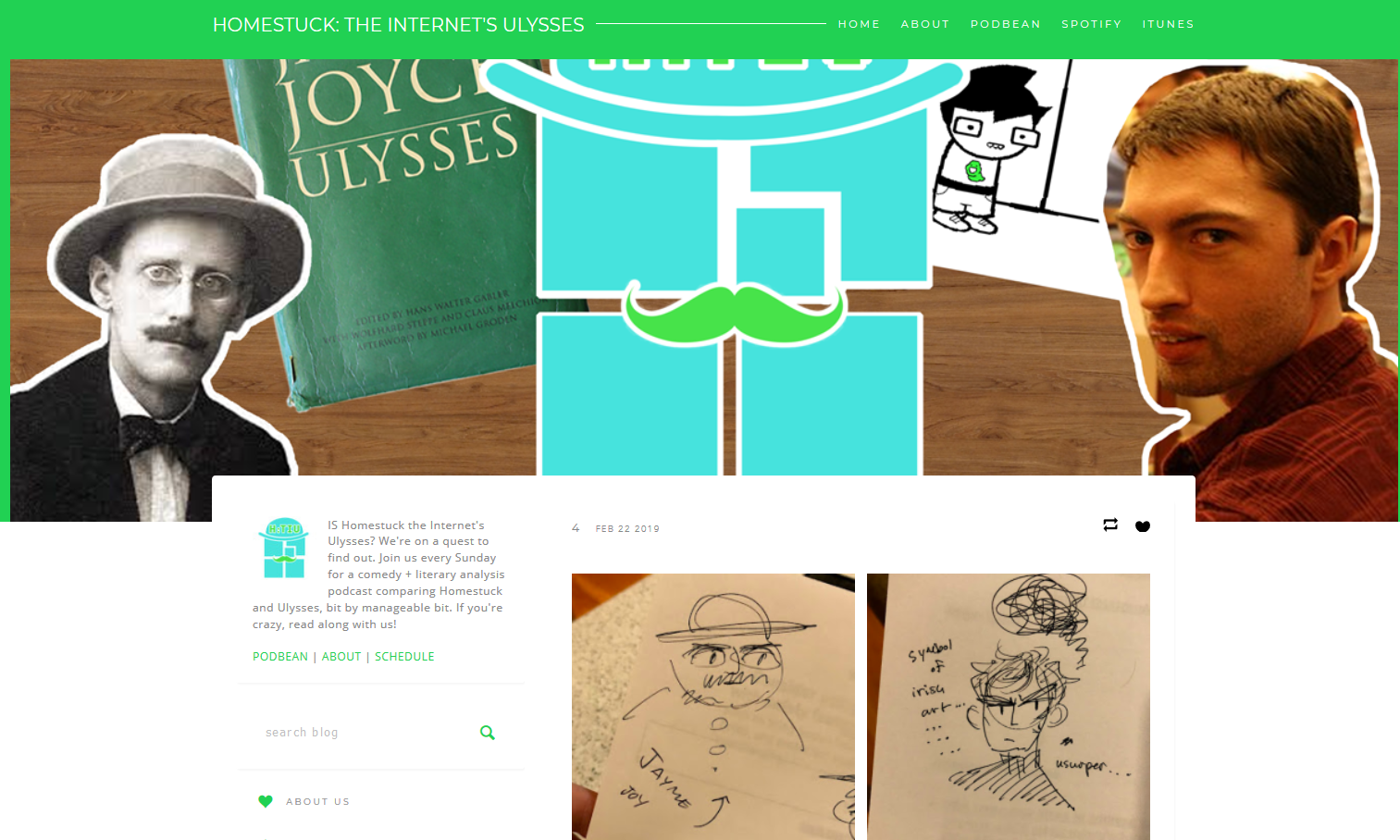 IS Homestuck the Internet's Ulysses? This podcast is on a seven episode (and growing) quest to find out. 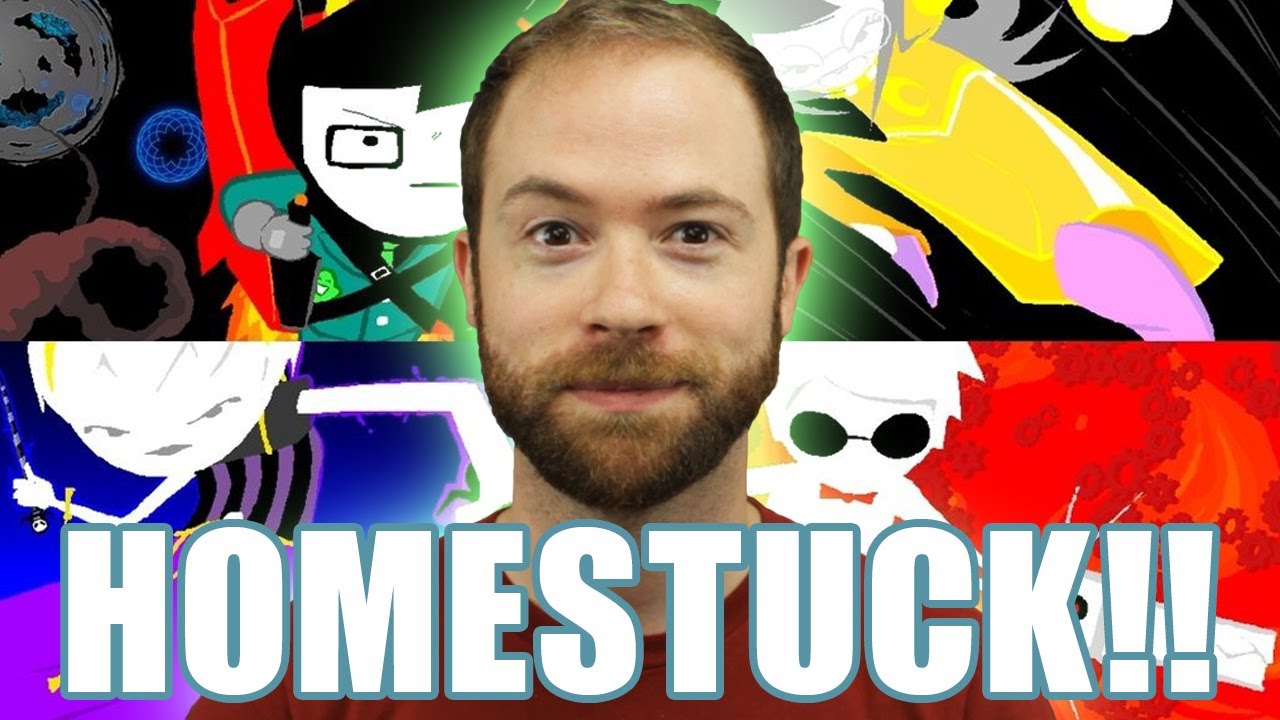 Is Homestuck the Ulysses of the Internet?

A very popular video at the time, a man talks to the camera for 6 minutes about how Homestuck is the internet's next masterpiece and comparable to James Joyce's Ulysses. 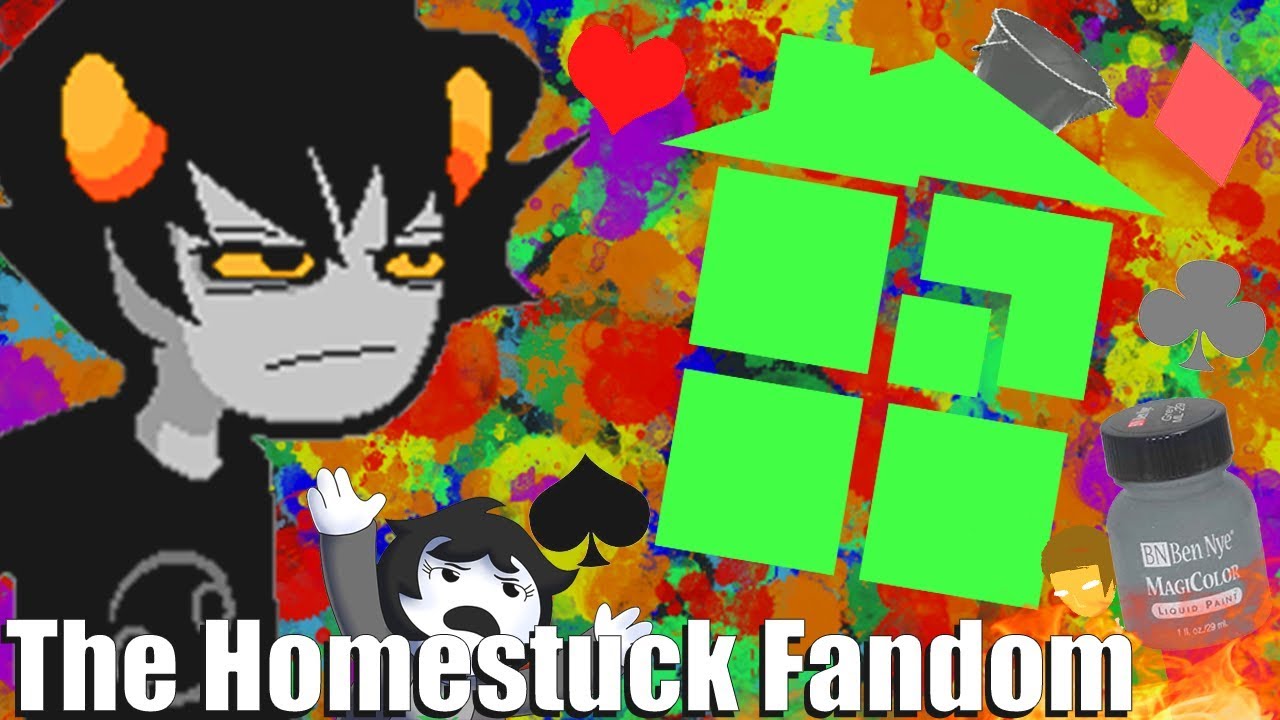 The Complicated Story of the Homestuck Fandom

A 40 minute video essay on the rough history of the comic and the fandom. Useful if you want to look at the status of today's and make a comparison.