Results of surveys, polls and censuses on the Homestuck fandom. If you have anything you'd like to add to this list, please use the Contact page. 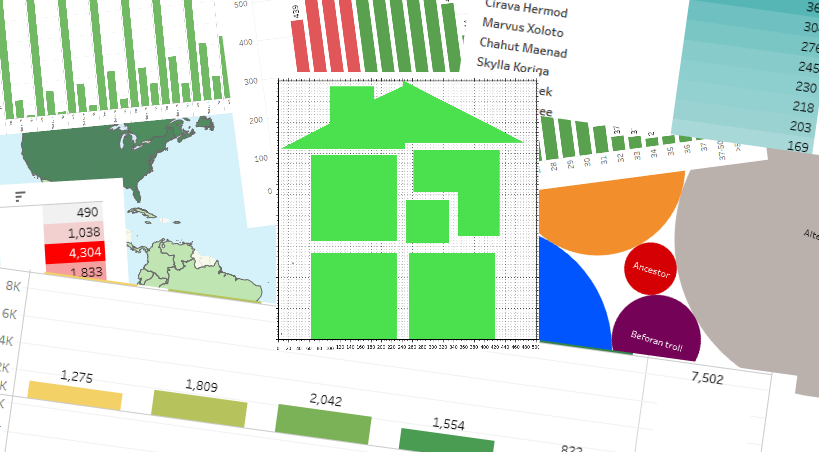 An independent analysis of the Homestuck Community Survey 2020, run by the team @hscommsurvey from July 10th to August 10th 2020, and claiming to be a successor to the official 2019 survey. The survey received 9854 responses. 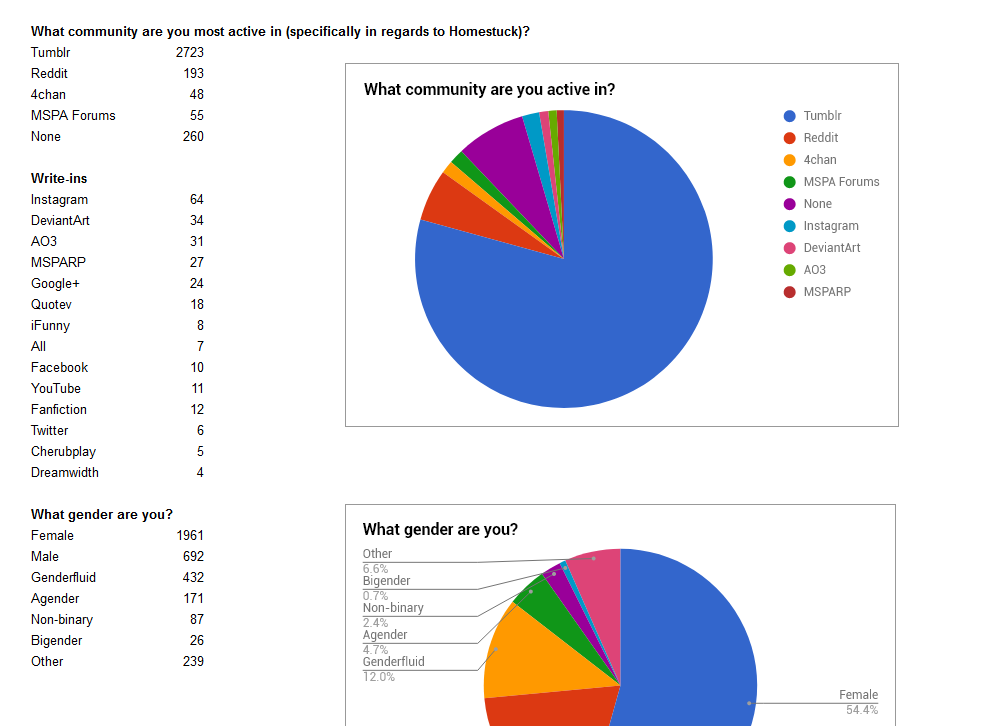 A mostly Tumblr-focused survey about the most popular ships, but also comes with some demographic stats, and 3609 people filled it.

The Facts of the Fandom

Results of a 2018 survey focused exclusively on self-assigned Homestuck themes like classpects and blood castes. 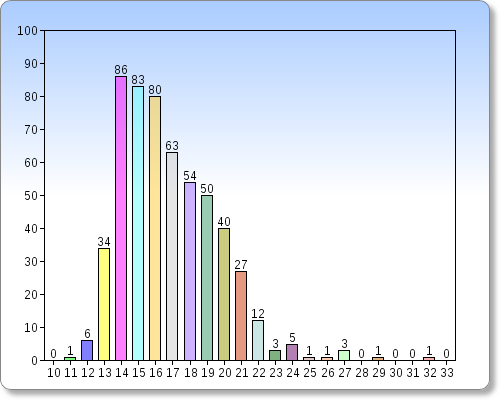 A 600-response census on Tumblr focusing exclusively on demographics, because the people running the blog forgot to post the fandom-specific results (like time as a Homestuck). Interesting to see that 14 was the most common age at the time. 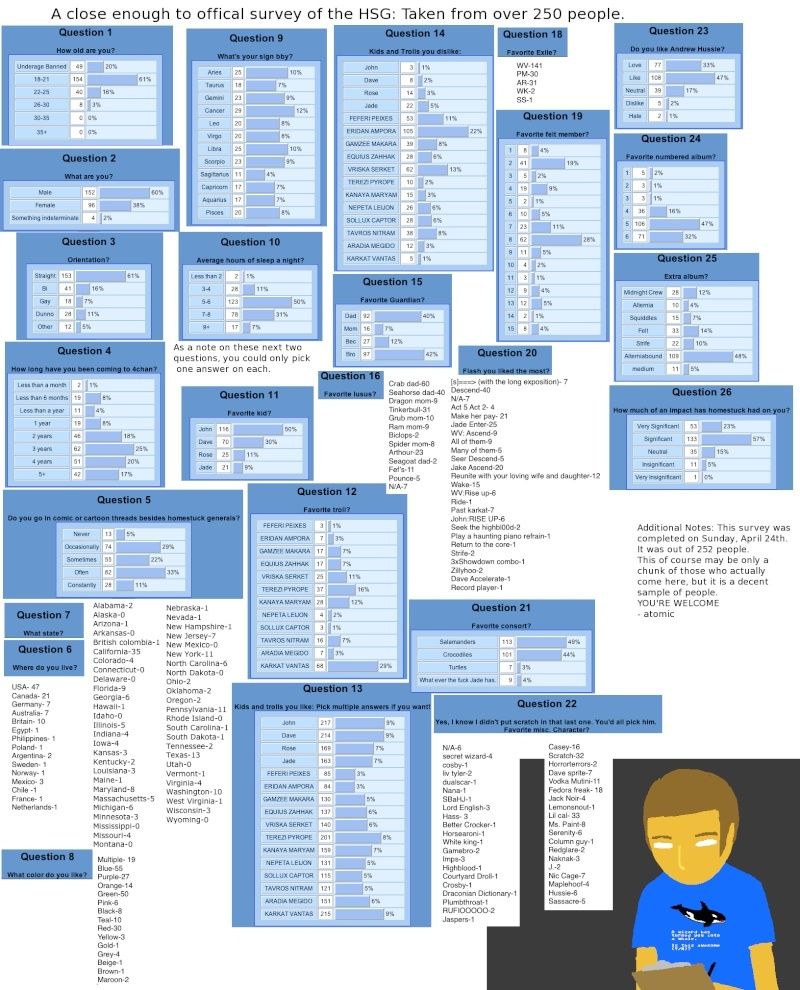 A 2011 survey focused on 4chan's /hsg/ threads, with over 250 responses. Did you know that people used to like Homestuck Vol. 5 more than Vol. 6? Amazing. 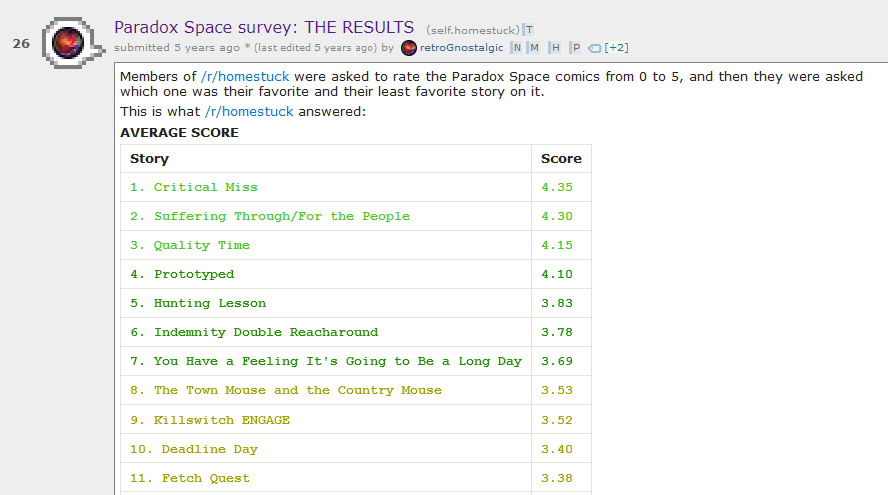 Back in 2014, people on /r/homestuck rated the 24 existing Paradox Space comics in order of quality. The most popular was Critical Miss, while the least popular was John's Birthday. 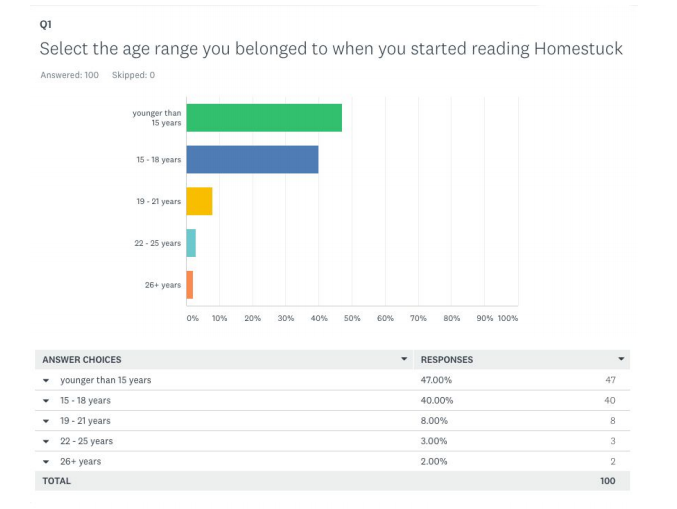 Someone's research project, focused exclusively on /r/homestuck and with 100 random samples taken from the final results to conduct an analysis. Has some unique questions like ones focusing on online friends. 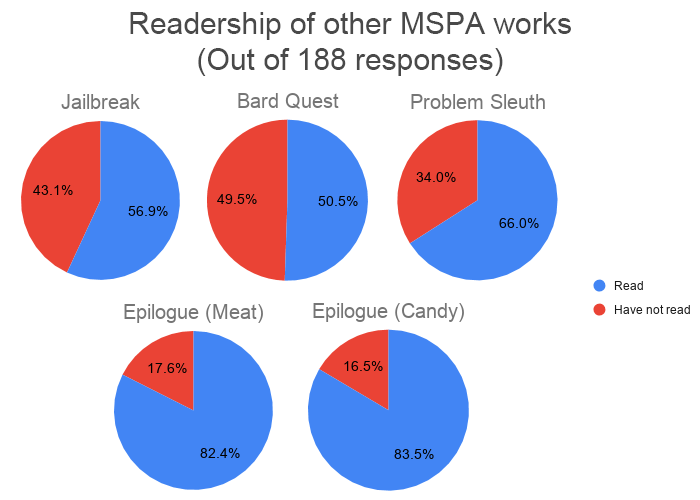 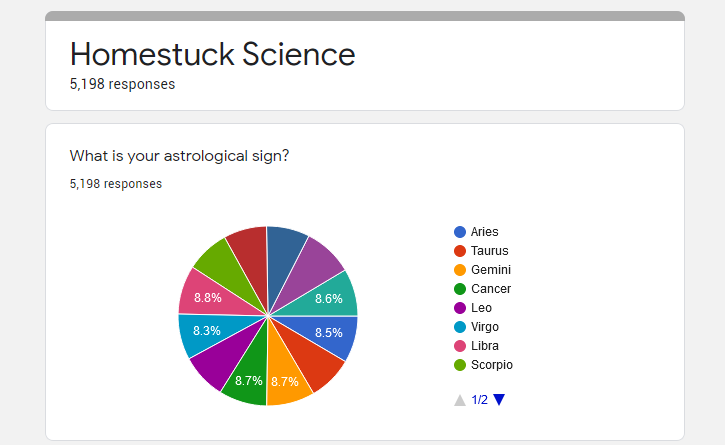 A 2014-2015 survey on Tumblr with 5198 responses focused on chosen traits like alignment, Hogwarts houses and Game of Thrones houses, though it also has favorite characters and classpects. Google results available here. 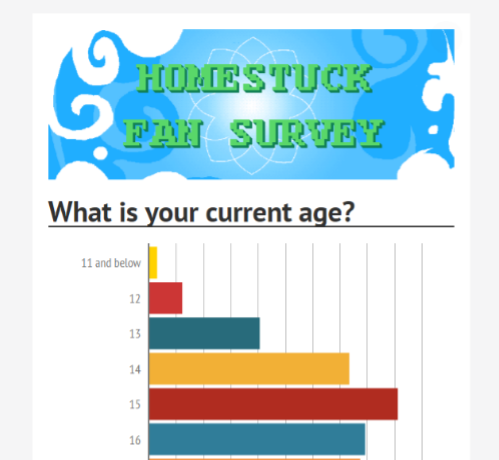 Surveying the Fans of Homestuck 2014

A macrosurvey across the MSPA Forums, Tumblr and /r/homestuck with 3385 responses. Some unique questions like fandom reputation, or what people read Homestuck for. Full spreadsheet available here. 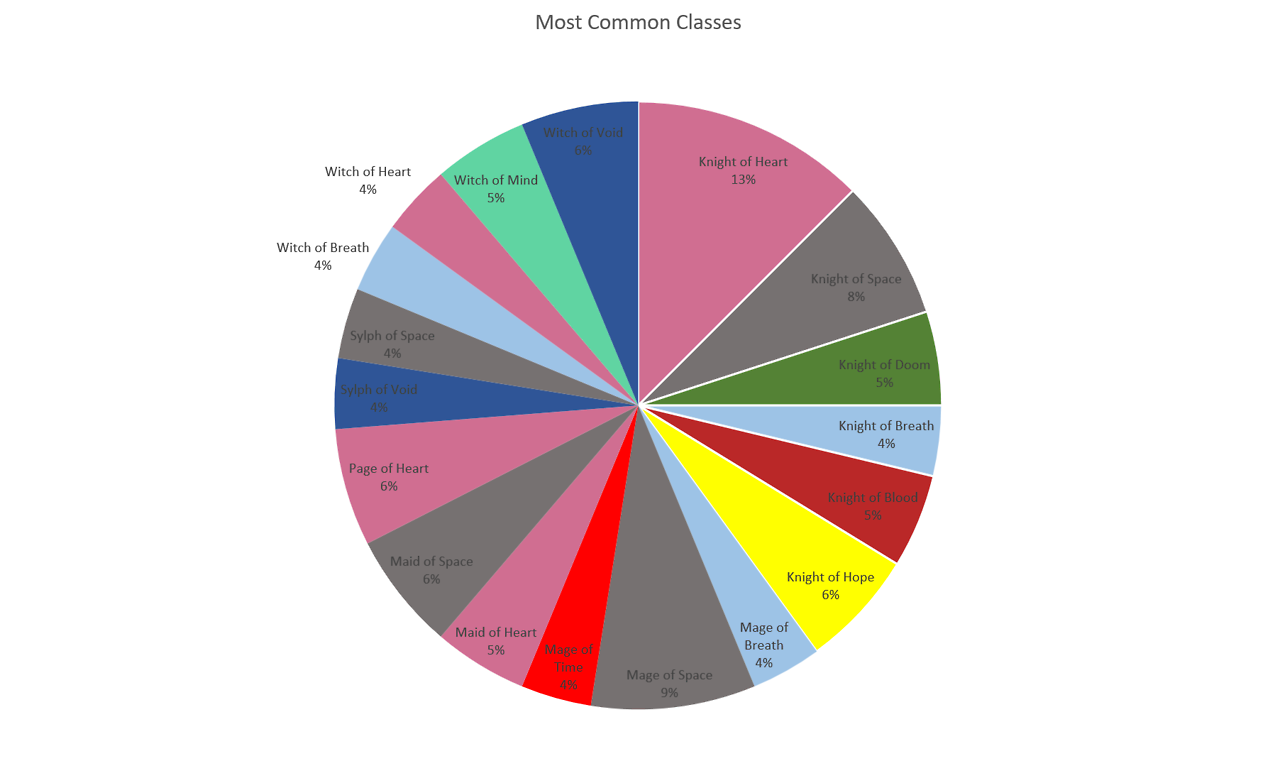 Two surveys made in 2018 to record people's most common classes, aspects, combinations, and extended zodiacs. 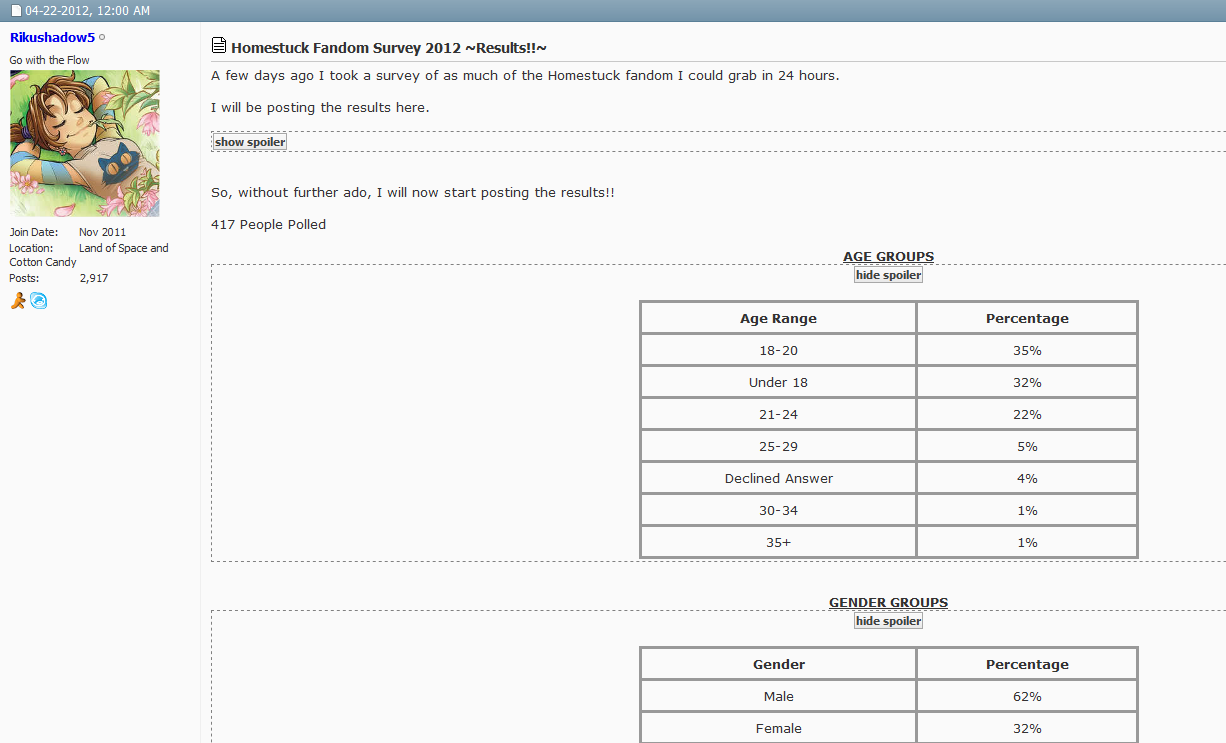 A survey made in 2012 in the MSPA Forums with 417 people polled. Mostly demographics.